A virtual 3D landscape model was built from terrain, land use and project data, which could be used as a basis for all views and animations to be simulated. The change in the valley landscape caused by the planned flood retention basin, for example, was depicted in a virtual drive along national road 124.

Individual significant views of the planned structures, were created as photo-based simulations. The representations were used by the clients to assess the impact of the project on the landscape and the scenery. 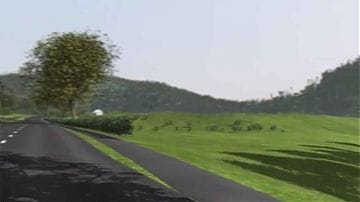